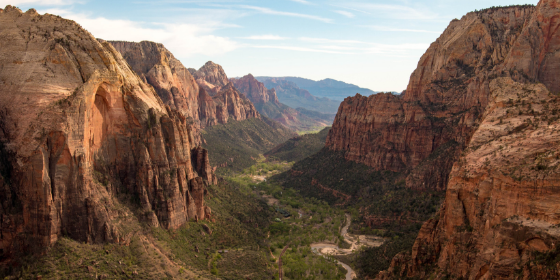 Zion National Park is packed full of stunning overlooks and beautiful trails. Despite covering more than 200 square miles, many of the park’s 4 million annual visitors flock to the same places. One of the most visited spots in all the park is Angels Landing. 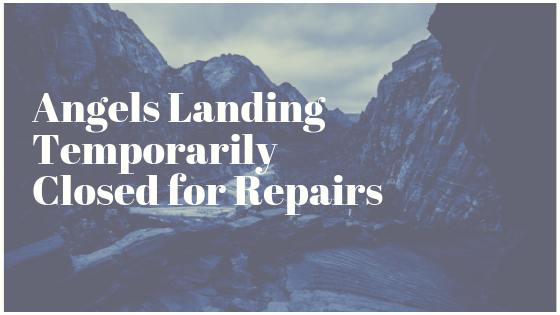 The Hike to Angels Landing

Angels Landing is one of, if not the most beautiful trail in all of Zion National Park. And it’s not just Zion either; Angels Landing often makes the list of most popular and stunning trails in all the nation.

But while it may be popular, many new visitors to the park don’t realize that it’s also difficult. The trail is 5-miles roundtrip, with an elevation change of nearly 1,500 feet. During the trek, you’ll climb steep switchbacks and cross cliffs with sheer drop-offs on either side. Make it to the top and you’ll be treated with some incredible views. Of course, you’ll then have to turn around and climb back down the mountain.

If you’re physically fit and have some hiking experience, the trail is definitely doable. But it does require some extra caution. When the rocks are wet, they can be as slick as ice, making those narrow trails and sharp drop-offs dangerous. Getting distracted while standing too close to the edge can also be deadly. While there are water refill stations before you start your trek, it’s important to remember to hydrate throughout your hike. The steep climb, heat, and lack of shade make heat exhaustion and dehydration a serious threat.

One other thing to consider if you’re planning to hike to Angels Landing is what time of year you’ll be visiting. Because it is so popular, lines may form at the trailhead during the busiest weekends of the year, like Memorial Day weekend and the Fourth of July weekend.

While Memorial Day or the Fourth of July weekend may not be the best time to plan to hike to Angels Landing, next week certainly isn’t either. That’s because the popular trail is set to close for repairs.

Beginning next Tuesday, August 20, the trail to Angels Landing will close. Park officials are planning to replace some of the posts that hold the support chains that give hikers something to hold on to while walking the narrow cliff tops.

The trail will remain closed all day Tuesday and Wednesday before reopening at 6 a.m. on Thursday. The maintenance is routine and not the result of damage. Two other trails that can be accessed by the Angels Landing trail, Scouts Lookout and the West Rim Trail, will remain open next week while those repairs are made.

Angels Landing is Not the Only Closed Trail

This isn’t the first time the popular Zion trail has closed to hikers.

Around this time last summer, Angels Landing was closed for several weeks. In that instance, flash floods had damaged the trail, making it too dangerous to hike. The flood also led to damage on other popular trails which were then closed. These included Upper Emerald Pools and Kayenta Trails.

Angels Landing won’t be the only trail closed next week. Upper Emerald Pools Trail, Hidden Canyon, and Observation Point, from Weeping Rock, all remain closed following storm damage that occurred earlier this year. The Kayenta trail is also closed after the 0.8 mile marker.

All of these trails have been closed for much of the summer, the park’s busiest time of year. This has pushed the crowds to other trails, leading to a bit more crowding than usual. Unlike the Angels Landing repairs, it’s unclear when the damage to these trails will be fixed so that they can reopen to visitors once again.

Other Trails to Hike While Angels Landing is Closed

While Angels Landing is closed, it’s a great chance to check out some of Zion’s less-popular, but equally beautiful trails.

Watchman Trail still offers a challenge, as well as  views unspoiled by crowds. Hidden Canyon trail is better known, but still a far cry from the typical crowds of Angels Landing. You’ll still get that heart-pounding rush as you walk narrow cliffs lined with sharp drop-offs.

For a truly different experience, head to Kolob Canyon. This part of the park sees far fewer crowds, despite offering some incredible views. Taylor Creek Trail is an awesome, quiet trail that lets you take in the tranquility of this side of the park.

Planning Your Next Zion Adventure

Any time you are planning to visit Zion for some hiking, it’s a good idea to check for trail closures ahead of your trip. This will give you plenty of time to find alternative hikes and make sure that you are prepared for them before you arrive in the park. 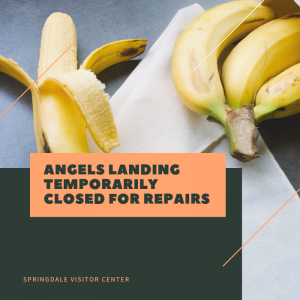