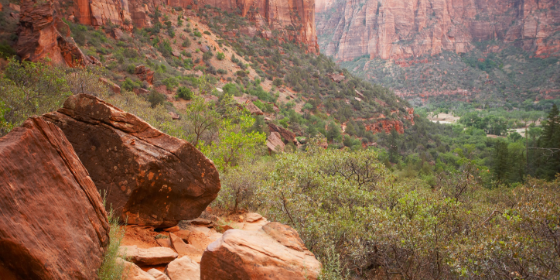 Labor Day weekend, and the unofficial end of summer is here. And after storms earlier in the season and a rockslide last week closed trails, the holiday crowds are sure to cause traffic and slow-downs in other popular areas. Here’s what you need to know to plan your Labor Day visit. 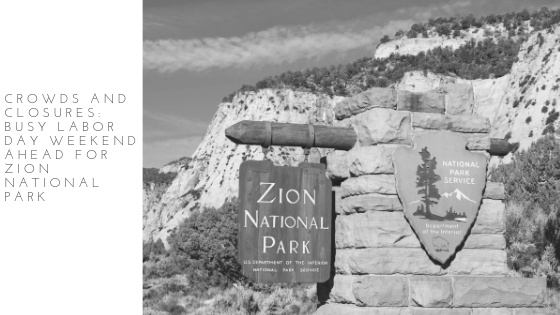 If you plan to visit Zion during any of the summer holiday weekends, like Memorial Day, the Fourth of July, and yes, Labor Day, one of the best things you can do is get to the park early.

Zion is notorious for its parking issues. For being the fourth most-visited national park in the country, Zion is relatively small. And most of its visitor boom has occurred in recent years. As a result, infrastructure like parking spaces isn’t quite equipped to handle the crowds. Even on less-busy summer days, it’s not abnormal for all of the spaces in the park to fill by late morning. On Saturday and Sunday of this weekend, there likely won’t be an empty spot anywhere in the park by 9 a.m.

If you have your heart set on visiting some of Zion’s most iconic overlooks and can’t make it to the park early or want more time to enjoy them, wait to hit the highlights until later in the day.

Many of Zion’s daily visitors come to the park in the morning and stay through the afternoon. By late afternoon, the crowds begin to thin. This makes it a great time to head back to the park after an afternoon away or on a trail to take some more pictures along the shuttle loop.

You don’t necessarily have to wait until late in the evening to catch fewer crowds either. Most of the park’s visitors take the shuttle and hop off at each stop, going in order. Which means that early in the afternoon, fewer people are getting off at the early stops. If you don’t mind riding the shuttle a few times, catch it early and ride to one of the later stops. Then, catch the shuttle again later in the day and hit the earlier stops you missed. The shuttle is free and you can ride as often as you’d like, making it a great tool for beating some of the crowds.

This weekend, park officials are anticipating around 20,000 people to enter the park each day. Many of those visitors will head to the park’s most popular spots. Unfortunately, storms earlier in the year and a rockslide last weekend has led to trail closures.

Upper Emerald Pools Trail, Hidden Canyon, and Observation Point, from Weeping Rock, have all been closed for several months now, after late winter storms caused rockslides and flood damage. The Kayenta Trail has also been closed after the .8 mile mark. These closures have been pushing visitors to some of Zion’s other popular trails, causing even more crowding.

While Angels Landing has reopened after a few days of routine maintenance earlier this month, last weekend another rockslide forced the closure of a different, popular trail.

On Monday, August 26, a rockslide on Cable Mountain sent boulders and debris tumbling down over Weeping Rock Trail. Three hikers were injured while several others were temporarily trapped. The trapped hikers were able to climb over the debris and back to safety, while at least one of the injured hikers was taken to a local hospital for non-life threatening injuries. The rockslide caused the Zion Canyon Shuttle to close for 90 minutes. While the shuttle opened again after a brief delay, the Weeping Rock shuttle stop, stop number seven, remains closed, as does the popular trail.

Plan to Hike a Lesser-Known Trail

Zion might be small compared to other popular national parks like the Grand Canyon. But that doesn’t mean there’s not space for everyone. The crowding is a result of too many visitors all heading to the same trails. If you want to avoid the trail closures and crowding, you need to head to the less-visited parts of the park.

One great option is Kolob Canyons. This little-known corner of the park offers equally stunning views, but far less traffic. It’s packed with hiking trails of various difficulties, as well as a beautiful scenic drive and plenty of overlooks. It’s also home to the second-largest natural arch in all of the U.S., Kolob Arch, which is surpassed only by Landscape Arch in Arches National Park.

Zion National Park is a great place to celebrate Labor Day and the end of summer. And with these easy tips, you can beat the crowds and still enjoy a memorable visit to this incredible national treasure. 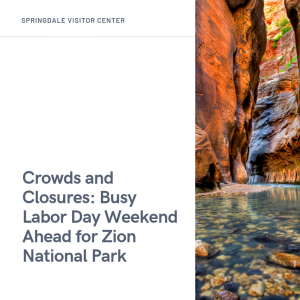